Don’t be afraid to trim those flowering shrubs and trees that need it. Failure to prune is probably the biggest gardening mistake a person can make. I spent 20 years landscaping homes and businesses, and I watched people make the investment in my services, then they failed to prune when the plants needed it, and before you know it their landscape looks terrible.

If you make a mistake pruning, don’t worry about it. It’s like a bad haircut, it will grow out. Of course use common sense and read the previous articles that I’ve written on pruning.

Along with summer time comes high humidity. High humidity can cause a lot of problems with the plants in your garden and around your house. One of the simple things you can do is don’t water just before dark. Make sure your plants are nice and dry when you tuck them in for the night and you can cut down of the chance fungus being a problem.

One of the more common fungi that I get asked about a lot is powdery mildew. This appears as a white film on the leaves of ornamental plants. Dogwoods and Purple Sandcherry are often the victim of powdery mildew. Powdery mildew isn’t extremely harmful to the plants, it’s just that the foliage is damaged, and little growing takes place once it sets in. Your local garden center will have a general fungicide you can spray if you’d like to try and control it. Usually once the plant defoliates in the fall the plant is back to normal.

If you have Perennial Rye Grass in your lawn, and you probably do if you’re in the north, you must be careful not to leave your grass wet at night. There is a fungus known as Pythium Blight that appears in very humid conditions. This fungus attacks and kills perennial rye grasses. Here in the north most of our lawns are a blend of fescues, perennial ryes, and Kentucky Blue Grass.

If you have problems with pythium blight you will lose the perennial rye grass in large areas of your lawn, and even though the other grasses will still be there and fill in, your lawn will have areas that are much darker green than the rest of the lawn because you will then have concentrations of Kentucky Blue grass.

You can see this fungus in the early morning. It looks like white cotton candy laying on top of your lawn. It usually appears along walks and driveways where the soil is the wet if you have been watering. To prevent pythium blight water as early in the day as possible.

Another nasty little blight that likes summer time is Fire Blight. Fire Blight attacks ornamentals, especially Apple trees, Crabapple trees, Cotoneasters, and Pyracantha. You know you have Fire Blight when a branch on one of your plants dies and turns almost red. The leaves usually hang on but turn reddish brown. The damage usually starts out near the end of the branch and works it’s way toward the main stem of the plant. There is little you can do except prune out the affected branch, cutting it as far back as possible.

Fire Blight is very contagious to plants so you should burn the branches you prune out. You should also dip or wash your pruning shears in rubbing alcohol after each cut to keep from spreading this deadly fungus.

Unfortunately, I’ve got one more summer time culprit to warn you about. It’s a handy little fungus that grows in mulch. Actually there are all kinds of fungi that tend to grow in mulches, and most of them are really disgusting looking. But this little gem is unique in the fact that as it grows it tends to swell. Then somehow it manages to explode, and it will spatter your house with tiny brown specs. The experts have appropriately named this one “Shotgun Fungus”. Isn’t that a cute name?

These tiny little brown specs will fly as high as eight feet into the air, and once they stick to your house or windows, they stick like glue. I know that right now there are people hollering across the house at their spouse, “Hey, remember those brown specs all over the house? I know what they are. It’s from the mulch!” Tell me I’m wrong, but I know I’m not.

A lot of people are victims of this nasty little fungus, but they don’t know it. All they know is that there are tiny brown specs on the house that look like paint. So far they have blamed everything from spiders to aliens.

There’s not a lot you can do to prevent this fungus. I have found that if you keep the mulch loose so air can circulate it is less likely to grow fungi. Don’t just keep adding layer after layer to the mulch around your house. You should skip at least every other year and just loosen the mulch you already have down. If you loosen it and then rake it flat it will look like you’ve just mulched. Mulch is great, just don’t let it get packed down hard. Loosen it up at least once a year. 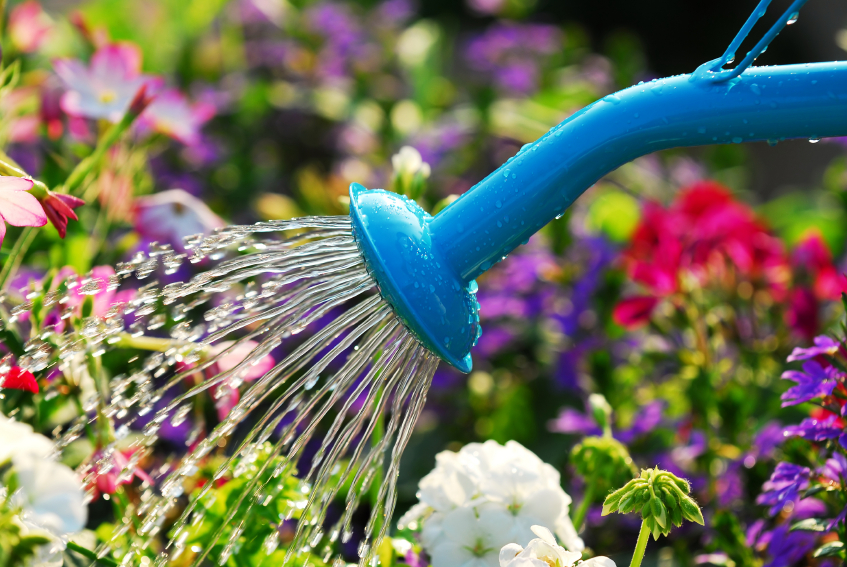